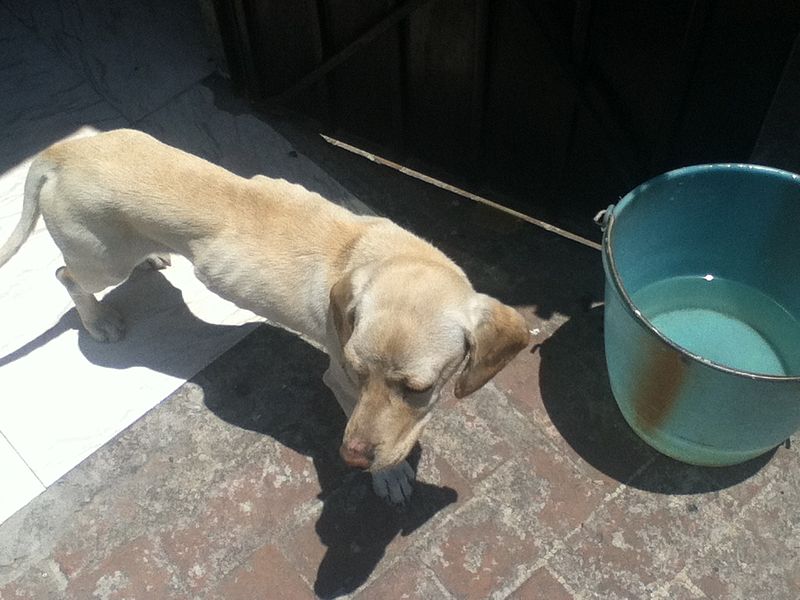 Animal cruelty is one of the many acts in the world that people acknowledge, yet very little people take action into stopping it.Without animals on earth, nothing would be left as a comfort after bad days. What some readers don’t recognize is that 51.6% of animals adopted or found on the streets have been abused. The most commonly abused are dogs, cats, horses, and even livestock. Believe it or not, 2 out of every 6 animals are abused each day (Animal Cruelty). Yet, when viewing a commercial relating to homeless or tortured animals, people get very upset, leave the room, and 5 seconds later forget about what was just shown on the screen.  The purpose of those commercials never quite seem to  sink into anyone completely.

Just picture it: walking down the street on a cold, windy night, and the sound of barking, traumatic barking, echoes in the night’s air. Turning right, a house made of brick lay ahead. A tall wooden fence, about 10 feet high, blocks the house’s backyard from view. Following the sound, a scarred dog with gashes covering its entire being is chained up to a tree, no food or water nearby. The house has a light on, and there are shadows moving around on the upper floor, yet no one comes down to see what’s wrong. The dog howls into the night air, shaking in the bitterly cold weather. Although it hasn’t sensed another person’s presence nearby, it remains sensitive, walking around in the pitch black gingerly.

A survey taken by the Humane Society shows that those who abuse these innocent animals are typically of male gender under the age of 30. When asking Lia Polcyn, a 13 year old resident of Cranberry Twp., PA, what is believed to cause someone to take such a violent approach at something so loving, she tells us, “I believe that what causes such violence is the person’s belief on the nature of animals. Some people think pets are a waste of space and time, and believe that they should be terminated from the world. Other people find entertainment in watching animals harass one another . . .  it’s a cruel thing that people don’t take into consideration.”

Many sources agree with Lia’s theory. Underlying these actions develop the issue of 64.5% abused animals being dogs, 18% being cats, and 25% of the abused being other animals. Although all 50 states now have felony animal cruelty provisions, animal abuse is an unfortunate occurrence daily. Approximately 43 of the 50 states have first-offense provisions. At least 6 states have enacted third offense felony animal cruelty laws, a felony charged if the perpetrator has previous animal cruelty convictions (Animal Cruelty). Next time a TV show turns to a commercial and an animal cruelty ad comes on, don’t just walk away, think about these numbers and what condition abused animals are in, like the dog, wounded and lacerated.

A tall, hunched silhouette makes its way downstairs. “If another sound is heard out there, the whip is sure to come out,” screams the figure, the threat echoing loudly outside. But the dog does not stop. Slamming of drawers and cabinets are heard inside. The backdoor is opened vigorously. Still watching through the cracks of the fence, a man with a field coat and fur hat whips the dog with a rope. The dog yelps in pain and terror.. what is there to do?

If the animal shows any overly aggressive or timid actions, consider the animal abused. Apprehensive movements, like the dog showed as its owner scourged, should help deliver the message of a mistreated pet. Open wounds, faeces, overgrown toenails, and severely matted fur are obvious signs of a badly treated animal. Seeing if the animal has access to water, shelter, and food is also a major factor of determining the pet’s cruelty. If the animal has no survival needs nearby, this indicates that the owner has an abusive relationship towards the pet  (Paws).

When walking by a donation bin of a cat or dog with missing patches of fur and discharged eyes, imagine what horrendous beatings and torture they’ve gone through. The more these awful acts occur, the more pets are wiped out of the world. A man’s best friend dies on a daily basis. A world without pets is a world without jubilation and exuberance. Nothing should ever be treated with such disrespect and inhumanity. Picture a world of non-violence, and what a peaceful place this era could be. Spread the awareness, make the change. It’s time to look in the mirror and stand up to what tragedies occur around the globe.