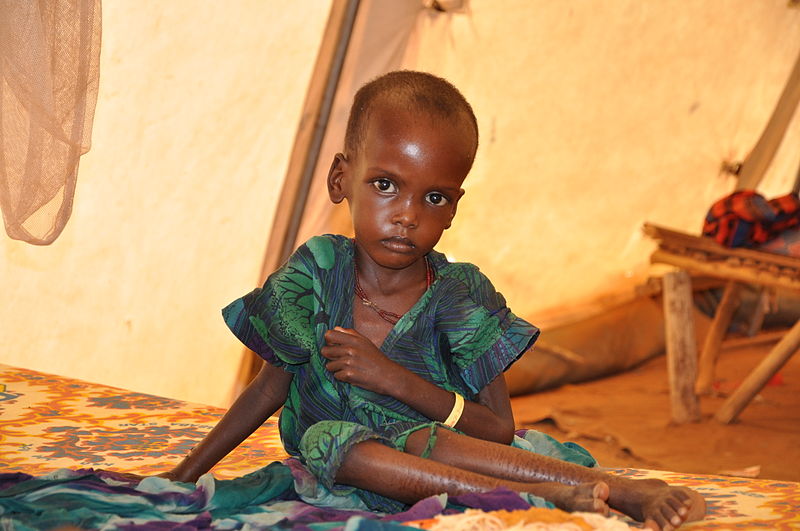 “I’m starving.” A phrase that has been so overused that is has lost its meaning to many people across the world.

Sasha tossed and turned the whole night, but it wasn’t anything new. Considering her straw mat placed on the uneven dirt floor, it was hard to get decent rest. But that night was especially painful; she hadn’t eaten in a whole day. She had become as thin as the POWs in Japanese prison camps during WWII. It’s not that she didn’t want to eat, it’s that she couldn’t. Her family and almost everyone in her village in Malawi were unable to get sufficient food.

“I’m starving,” she whined. And she truly meant it—this was no slight hunger. Her stomach roared, like a lion waiting for its next meal. But no one could comfort her. Her body was so desperate for nutrients that she couldn’t even focus on simple school tasks like reading and writing anymore.

Sasha turned back over to face the wall and clutched her stomach. The pain was getting to be too much to bear. She was young—only 12 years old—and had so much to look forward to in life. She wanted to finish school, get a job, and  start her own family, but she knew she may not make it that far. She needed someone to help her, someone who had the resources.

At first it seemed that hunger in poor and developing countries was an easily resolved issue. But now this problem has been plaguing the world for years. New technology and products distract people from the severity of hunger. Not enough people truly care about the matter to make a change. In a survey taken at Seneca Valley Middle School, 15 out of 15 students knew of hunger in third world countries, but only 6 out of 15 students had given money or care packages.

A resident of Butler County, Eileen Harrison, also gave her thoughts on world hunger. When asked what she knew about the subject, she claimed, “People aren’t getting the help they need from their government. When there’s drought or war that stops their food supply, they don’t have the resources to provide for themselves.” She also stated, “It’s ridiculous that in 2015 people are still going hungry.” When she was asked what she has done to help solve this devastating issue, she explained the charity that she is involved in. “Every year for Christmas I use the charity Heifer International. When you purchase an animal like pig or chicken in someone’s name, they give that animal to a family in need. They receive the ability to not only provide for themselves, but also to others in their community that may also be facing hunger.”

In poor, underdeveloped nations, 1.02 billion people are suffering from malnutrition. What some people may not know is that this hunger can lead to numerous other diseases and problems. Undernourished people have weakened immune systems and are at a high risk for diarrhea, malaria, and measles (World Hunger).

So what causes this? Why do these people have to go without food? According to an article published on World Food Programme, “Earlier this year, the southern part of the country suffered flooding which affected more than 1.1 million people . . . With huge areas of arable land lost in the floods, the food security outlook was made worse when in March severe dry spells badly affected crops across the country” (New Study). This evidence is significant because poor, hungry people can’t recover from natural disasters like most people can.

People living in areas where natural disasters are not uncommon face added struggles. Other reasons for starvation are that people don’t have any land or other resources, wealthy people are over-consuming, and the impoverished don’t have much of a voice to stand up for their own good (World Hunger).

Though this may be extremely devastating, it’s the truth. But starvation doesn’t just effect individuals, it can effect the whole entire country and economy. When children are young and don’t receive the nutrients their bodies require, they can suffer from low height for their age. This is called stunting and it can cause repetitive illness, bad grades, and insufficient work performance. According to The Cost of Hunger in Africa—a 12 country study mentioned on the website World Food Programme—“In Malawi, where two thirds of people are engaged in manual activities, it is estimated that MWK 16.5 billion (US$67 million) was lost due to the reduced productivity of those who were stunted as children” (New Study). What is revealed here is that if time and care was given to these unfortunate people, entire countries would be more productive and successful.

And so it becomes even more clear that a change needs to take place. Communities, families, and other individuals need to start giving some of what they have to third world nations. Whether it’s giving time working on a mission trip in Africa, donating money or food through a charity such as Heifer International, or even just educating people on how to solve this problem: small actions can have a big outcome.

So is it really worth it to eat out in fancy restaurants when there are people who are struggling to find their next meal? It’s time for everyone to lend a fork and end the fight for food.