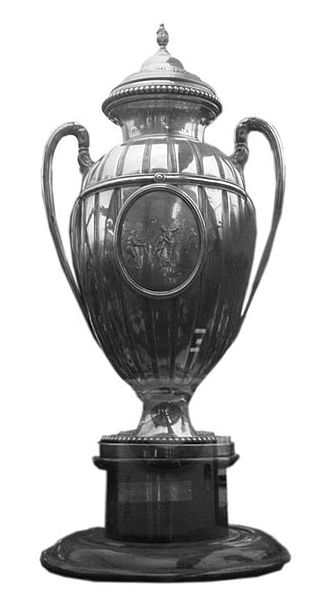 The whole crowd bursts out into cheering. The scoreboard reveals a score of 45-17. The undefeated Bulldogs are running out the clock, ready to take the victory of the last game of the season. The audience cheers as the clock runs down 3 . . . 2 . . . 1 . . . , and the parents run onto the field to congratulate their  kids as the final whistle blows. As the Bulldogs accept the tall, gold trophy as a symbol of their victory, a voice cuts through the celebrating. “Each player on the Gators team will still be awarded with a trophy for participating and playing football this season.” The crowd is in shock as only the first place trophy has ever been awarded. Won’t this teach kids the wrong message that everybody is a winner? That just showing up is enough? Children have to be taught that they can’t always win and they have to earn what they receive. In order for them to learn this, participation trophies and constant congratulation must become a thing of the past.

Steeler’s linebacker James Harrison agrees as he didn’t even allow his kids to accept their participation trophies.  By a post on Instagram on August 15, 2015 he announced that he is sending back his two son’s participation trophies until they earn a “real trophy.” Under a post of a picture including the trophies he writes,” While I am very proud of my boys for everything they do and will encourage them until the day I die, these trophies will be given back until they earn a real trophy. I’m sorry, I’m not sorry for believing that everything in life should be earned . . . that they are entitled to something just because they tried their best [be]cause sometimes your best is not enough and that should drive you to want to do better”(Sorry, Not). What is revealed here is that you have to teach your children that in the real world, they have to earn everything they get. They have to know that they can’t expect to keep a job if they have the mindset that just showing up to the job is enough.

It turns out that other parents feel the same way as Harrison. Keller Youth Football Association announced that they are going to stop giving out participation trophies on social media. Kim Barron Skinner commented to the post, arguing that it will be hard for kids to handle disappointment if they are always used to winning. She remarked,” How do you teach your children to be good winners or good losers if they don’t win and lose? I feel sorry for the kids who never learn disappointment. How will they handle life . . .  such as not getting the job they really wanted?” (Axelson) If not getting a trophy is hard to deal with, the bigger problems of not getting a wanted job are going to be almost impossible to deal with.

While some parents agree that participation trophies should be eliminated, others will try hard to make sure they stay even if a team gets rid of them. A soccer team in Los Angeles once gave out trophies to everyone and didn’t even keep score to  prevent kids from feeling bad. When this was ended, some parents took it upon themselves to buy trophies and give them to all the kids to help their self-esteem (Grossman). Actions like this need to be stopped. Even if it helps their self-esteem now, it will be regretted later when they can’t face disappointment and frustration.

Unlike common belief, giving all kids a trophy does not encourage them to improve, it may actually cause them to underperform (Merryman).  In fact, giving too many trophies lowers expectations and, as a result, kids feel more satisfied with last place (Grossman). If a child receives an award for last place, then it makes it seem not so bad, and they feel as if they did just as good as everybody else. Although encouraging children is necessary, constantly telling them that they are special and more important than everyone else has negative effects. This may cause kids to  develop the quality of narcissism, just as the mirror in Snow White symbolizes.  Other traits this causes children to have are “irresponsible and unmotivated”(Grossman). Imagine walking into work and being paid just for walking through the door. Wouldn’t that cause there to be no motivation? Why try any harder when it is known that just as much will be earned by not trying than there would be by trying really hard?  Once this goes too far, children don’t try to advance in a certain area and are not as competitive because they feel they will get an award no matter what (Merryman).

According to Luke Schultheis, former basketball player and a second place finisher, participation trophies are not a good idea. “My team came in second place and we didn’t receive a trophy. I feel that trophies mean more only if you win first place. If I would’ve received a trophy, I would’ve felt as if I didn’t deserve it and I felt that just playing didn’t automatically give me the right to a trophy.” Added on to previous evidence, this suggests that those who don’t have a background with participation trophies still feel the urge to win and want to win a genuine trophy, while those who do don’t bother to compete because they take a trophy for granted.

A study that was performed by researchers Bradley Morris and Shannon Zentall in order to observe kid’s reactions to being complimented revealed that when kids drawings were described as impeccable, they focused twice as hard on fixing their mistakes than those who weren’t congratulated on their talent (Merryman).  Underlying this study is the belief that kids who are surpassed by others give up and kids who are congratulated feel the need to impress even more.

Another reason participation trophies should be eliminated is because they are protecting children from overcoming struggles and difficulties. A doctor at Washington University, C. Robert Cloninger argues, “If you constantly reward a kid, you spoil them, and you don’t build a capacity for them to be resilient to frustration”(Grossman). This is significant because it gives kids the wrong message. They will suddenly get very stressed when things get difficult because they are not used to doing things wrong.

There are steps that can be taken to prevent children from believing that everybody is a winner and that they are more important than others. Be sure to encourage them, but not too much. Make sure that they earn the things they receive. If given an allowance, make sure they did the chores they needed in order to earn that. Also, be careful when enrolling children in a sport. By teaching them now that not everybody wins, it will be doing them a favor later. If they grow up believing this, it will be difficult for them to change. So, before making a final decision for a team, it would be a good idea to look into the details. If the words “Here, everybody is a winner” or “Trophies for all” come up, continuing to search would not be a bad idea.