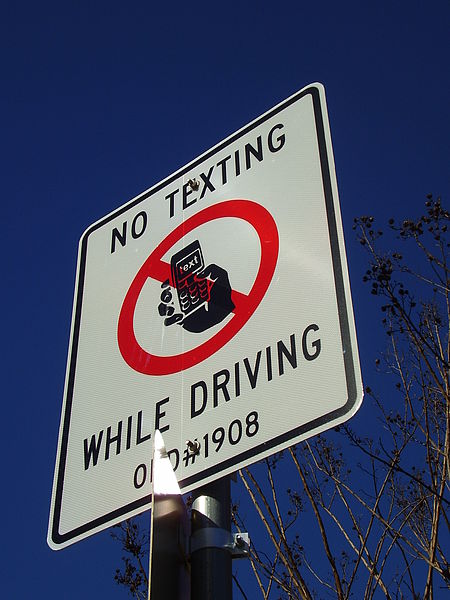 Is reading a text worth someone’s life?

Alyssa’s life was changed forever because of a texting and driving accident. One morning on her drive to school she got a text from her friend about a party that night. She didn’t know the dangers of texting while driving, so she read the text message. Alyssa was driving up to an intersection while reading the text, when little did she know a mother that was taking her eight-year old son to school was driving across the same intersection. Alyssa was too busy looking at her cell phone to realize that the traffic light was red and her car slammed into the mother and son’s car like an a wrecking ball ramming into the side of a building. The son was killed on impact from the forceful collision that Alyssa caused by texting and driving.

Alyssa wasn’t just being careless, she was being selfish too. She was only thinking about reading her friend’s text message and responding to her, not the other drivers on the road that could be affected by her distracted driving. Underlying these actions is the issue that 660,000 other drivers attempt to use their phones while driving. Every time those drivers pick up their cell phones they are risking their own and someone else’s life. People die everyday from texting while driving accidents. “11 teens die everyday as a result of texting while driving” (Cell phone  Use). This evidence is significant because 11 teens will not be able to live their lives since they passed away due to a texting and driving accident.

Looking at a cell phone while driving is very dangerous because it is distracting and the driver’s eyes are not on the road. Using a cell phone while driving increases the risk of a crash by four times. What some readers may not realize is that “341,000 motor vehicle crashes in 2013 involved texting” (Schumaker). Texting and driving kills thousands of people each year and it can be easily prevented. To prevent the urge to use their cellphone while driving, the driver should turn their phone off before driving. If there are passengers in the car then they should also encourage the driver to shut their phone off. Texting and driving is very common and is the cause of too many deaths.

Texting while driving accidents are taking away people’s loved ones, but it is easily preventable. Stop texting and driving car accidents; they are reckless acts that kill innocent people. Picking up that phone and reading an insignificant text message while driving is not worth taking someone’s life.